Historic evidence of the existence of the Vino Santo near Castel Toblino dates from the 16th century and the production of a pure Vino Santo from the Rauten vineyards in Sarche has been certified in 1825 (Melbourne-Australia certification1880-1881).

The ancient tradition, masterfully perpetrated in time right up to the founding of the Salvetta brothers´ winery  : consisting in a long and complex process that leads to the birth of this great wine for meditation.

In fact, the Nosiola grapes are picked late and laid in well-ventilated areas on the "Arele": the trellises on which the grapes dry naturally for several months, until the pressing, which takes place during the Holy Week, or between March and April of the year following the harvest. The wine is then fermented and aged for five years in oak and stainless steel barrels until bottling.

The result is a dessert wine to be enjoyed at a temperature of 10 - 12 degrees, on its own or accompanied with dry biscuits. It is also ideal with blue cheese and foie gras.

The ancient tradition of a superb dessert wine for meditation. 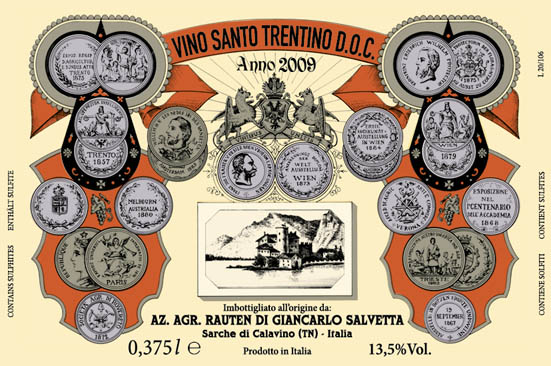